Archive for the category “LA X”

Inside the Looking Glass

When people recollect about their past, it gives rise to all kinds of emotions.  Many of those emotions are thought to have dwindled on the vine, but in reality, they are just dormant, resting  and waiting for the sprinkle of acknowledgement that revives them instantaneously.  My California experience is no different. It could have been a dream with all the strange happenings and truly surrealist environment.

Our fantastic excursion continues as we arrive in LAX late at night.  My mother tells Ray that my uncle will be picking us up in a “MACK” truck.  Ray stopped and just looked at my mother. He was just as surprised as I was.  I didn’t know what a MACK truck was. We walked outside to the pickup and drop-off outside the airport. When, out of nowhere, my Uncle Mike came running from the passenger side of an 18 wheeler. He ran towards us and grabbed me as he ran. My mother and Ray followed behind. We circled back around to the truck, where he tossed me into the cab as he grabbed my mother and helped her in. He closed the door and we drove off leaving him and Ray on the curb.  I scraped my ankle as I got into the truck. It wasn’t bleeding but  sure did hurt.

The driver of the truck looked over and introduced himself as Bobby Riggs. He had a black cowboy hat, scraggly long jet black beard and he was wearing dark tinted glasses. His shirt was a black country-western shirt with white pearl buttons.  He made small talk with Mother about the plane and the ride. The only thing I remember him saying was “now you are safe, little one.” I suddenly became concerned about my Uncle and Ray. Where they safe? I asked my mother about them. She said something I would always remember. She said ” Don’t you worry about your Uncle Mike. He can handle anything.” 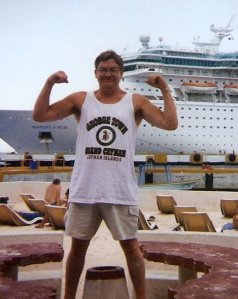