Archive for the tag “plane”

When I tell  people about my family, I have to remember who my family is. People can’t wrap their heads around the reality of my family.  Every single relative has a chemical dependency problem. How do you make that normal or coherent for somebody? On our spontaneous jaunt to California, I realized for the first time how unconventional and off the chart my family was as a whole. A stranger skulking our house early on a Sunday morning. I heard my grandmother feverishly making phone calls to what seems like random people. My Uncle Mike in California was screaming through the phone. My mother was recovering from a drunken bender the night before at a friend’s house. This wasn’t the most odd Sunday but it wouldn’t be a typical day in the life of any of my friends.

It was a crisp Sunday morning. What the hell was going on? By the end of the day with virtually no clothes or possessions we were on a plane L.A.X. Before we boarded the plane, an older man with kind face walked up to my mother and hugged her. He said it had been a long time. He was trying to calm my manic mother. They discussed what my uncle wanted us all to do. She finally introduced me to him.  “This is Ray. He’s Ernest’s brother.” 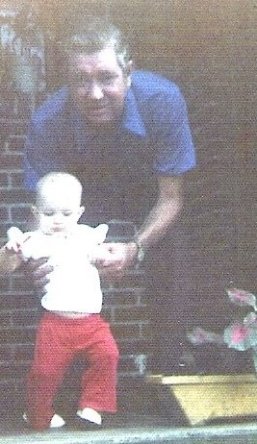 Ernest was my Paw Paw. Even the mention of his name, made me smile. He died when I was 3 years old, but I remember him being the source of continuous laughter and him being a clown all the time. It wasn’t until I was older that I was told he was just “a damn old drunk”.  He couldn’t hold a job; he sponged off my grandmother who worked midnights at Waffle House-esque diner known as the “Steak and Eggs”. But to me, he was my crazy Paw Paw telling jokes, pulling the chair out from under my mother or taking me to the little general store to buy me whatever kind of candy I wanted.

Ernest wasn’t biologically related to me. He had been my grandmother’s last husband many years after the death of my grandfather, Curt. He was younger than my grandmother by about 8-9 years. He died abruptly in 1977. I remember the night clearly. I was a sleep on the couch in our living room on Cypress drive. It was odd because my mother wasn’t there; it was just me and my Daddy.  My mother didn’t drive and I don’t know where she went. My normal routine was to sit down with my Daddy and watch TV after my bath. Daddy would carry me to bed, but this wasn’t what happened this night. Daddy said we had to go see Paw Paw. We drove up to their apartment. There were flashing lights everywhere. People were walking all around. It was the middle of the night or at least it seemed like it to me. I’d never seen people at their apartment before–not even the neighbors. My daddy and I sat down on the stairs amid all the chaos. He had a look on his face. It almost looked like anger. He was a mild man. He didn’t throw fits or anything. He would look at you with this look of disappointment and restrained words.  It wasn’t a scary look; it was a look that always made guilt well up in my chest. I remember asking where Paw Paw and Grandma were. He said Paw Paw was sick and Grandma and Mother had gone to see how Paw Paw was doing.

None of those words meant anything to me really. I never realized I’d never see my Paw Paw again. I was “his baby” as he’d always say. He came to our house all the time. I knew my Daddy didn’t like him or my Grandma for that matter. Daddy had never taken me to see them before. It was unusual but I couldn’t comprehend the truth of it all. My Paw Paw had died. Grandma had found him when she came home. Mother was at the hospital with her.

Now 5 years later we sit in an airport terminal with a brother of his, on the spur of the moment. I had school Monday morning. What had happened now?